undoubtedly authentic, versatile venue with a laid back farm lifestyle, a working farm.

‘I have a good reason to get up in the mornings,’
— says Agnes de Vos, self-taught farmer, entrepreneur, and producer of fine wines.

For a woman who’d spent the ‘most important part’ of her life in Jo’burg — where she was married to a lawyer and raised four children — moving to the family farm Damarakloof Wedding and Function Venue in Muldersvlei to take up the reins of a pig farm left her feeling ‘shell-shocked’. What was required was a shift in mindset and a practical approach. Agnes rolled up her sleeves and set about learning the ropes. There’s no doubt Agnes’s indomitable spirit and Brave Heart will inspire a generation of women. ‘I’m proud of the fact that the farm is now able to stand on its own, that it’s a viable, attractive prospect,’ she says, as she rounds her grounds, eliciting warm smiles wherever she goes.

Damarakloof invites you to share this undoubtedly authentic, versatile venue with a laid back farm lifestyle, a working farm.

Portrait of a Lady
Her mother had endured harsh conditions in her early married life when she and her husband started farming here with nothing after WW2 (‘there was no money or water, but weeds aplenty’). Agnes’s grandfather’s farm had been divided into four. In those days it was unheard of for a daughter to inherit anything of value, let alone land. ‘She fought hard to get her piece of ground, even though it was considered worthless,’ says Agnes. This flat, infertile tract had been used by him to train racehorses, greyhounds and pigeons.

In the early 90’s, Agnes’s mother died, and it was up to Agnes to take over the reigns of the pig farm she had established on stony ground. ‘All my children had left home and I was free,’ says the handsome woman with a fine, classic style and soft voice. ‘You get a lot of help if you ask for it. I’ve thrown myself at it for the last 30 years. Every year I’d say to myself, “Oh, by next year it’ll all be done”!

In 2010, two decades of successful pig farming later, and ever the courageous pioneer, she decided on a change of direction. She started by ‘tidying things up’. The farm’s ageing infrastructure, she conceded, were no longer adequate for large-scale pig farming production. Farrows, sheds and workshops were converted into function halls and long-term guest houses for artists and writers; the process overseen by Agnes and her trusted advisor and friend, Mr Jones the builder. Inside these spaces, tables crafted out of scaffold planks, handpicked antique light fittings and reclaimed floor- and ceiling boards give a historical air and a warm, lived-in feel. ‘I like real things,’ says Agnes, ‘I don’t like to wear or have anything that’s not of the earth… Demolition yards are where I go shopping!’

Agnes’s mother had also planted vineyards of Chenin Blanc which, she’s come to realise, are increasingly renowned for their specific flavour, and a depth which new vineyards don’t have. In 2006 she decided to start making wine, earning 4.5 stars in the John Platter Guide for the aptly named Racetrack Chenin Blanc 2006. The operation, assisted by winemaker Carla Pauw, is small, producing just 4 000 bottles, with Agnes selling every bottle herself. In summertime this grandmother of 12 likes to be in her garden, flecked with early spring blossoms, takes her dogs for ‘runs’ (she drives, they follow the farm bakkie), and is interested in food and spending time with friends, when time allows: ‘I look forward to being more socially active into the future, right now I haven’t the time.’ 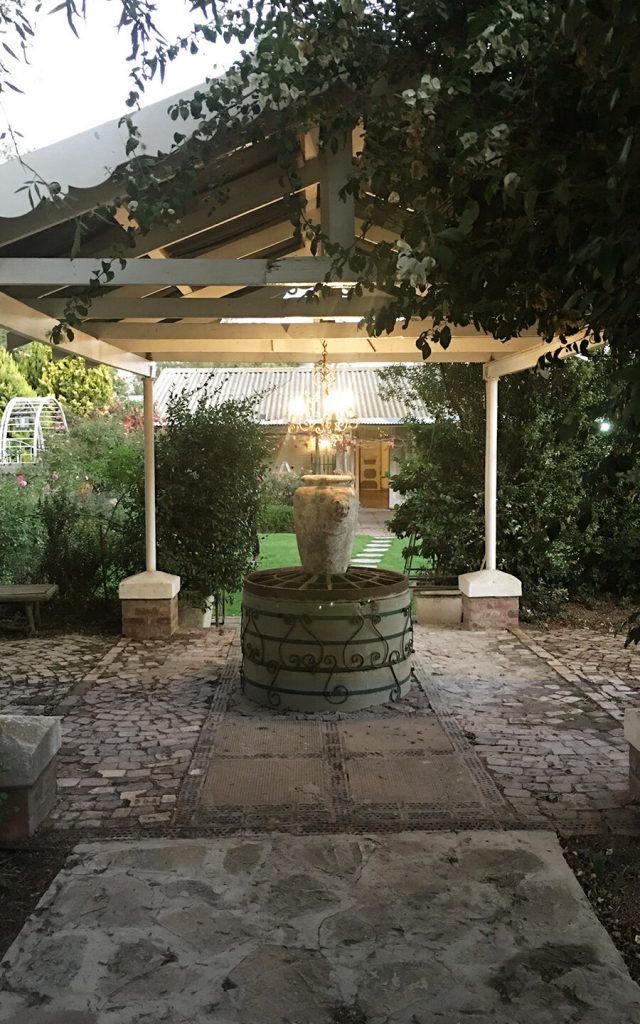 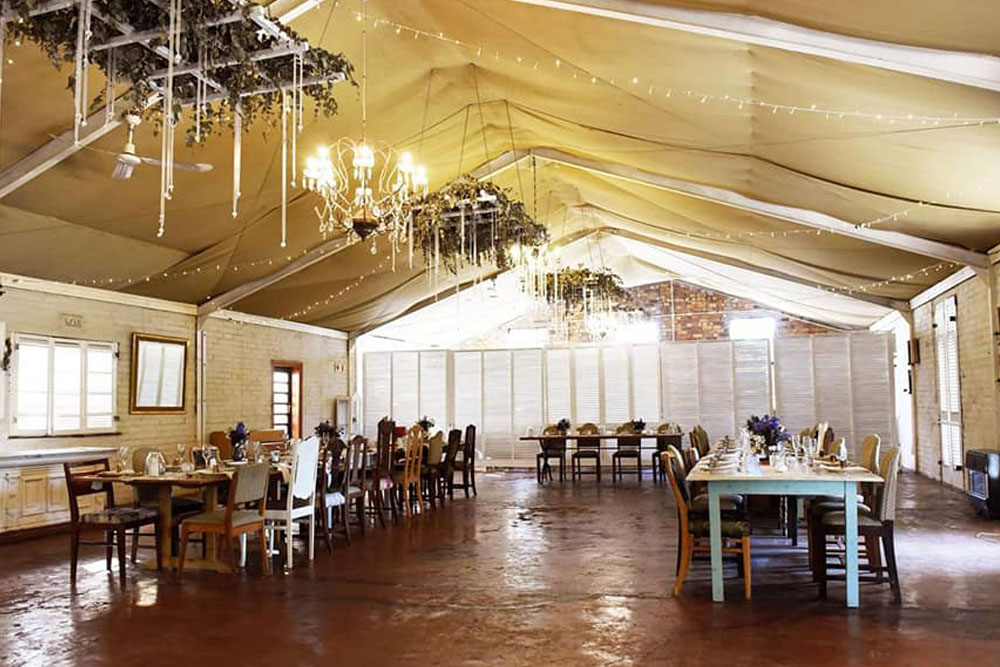 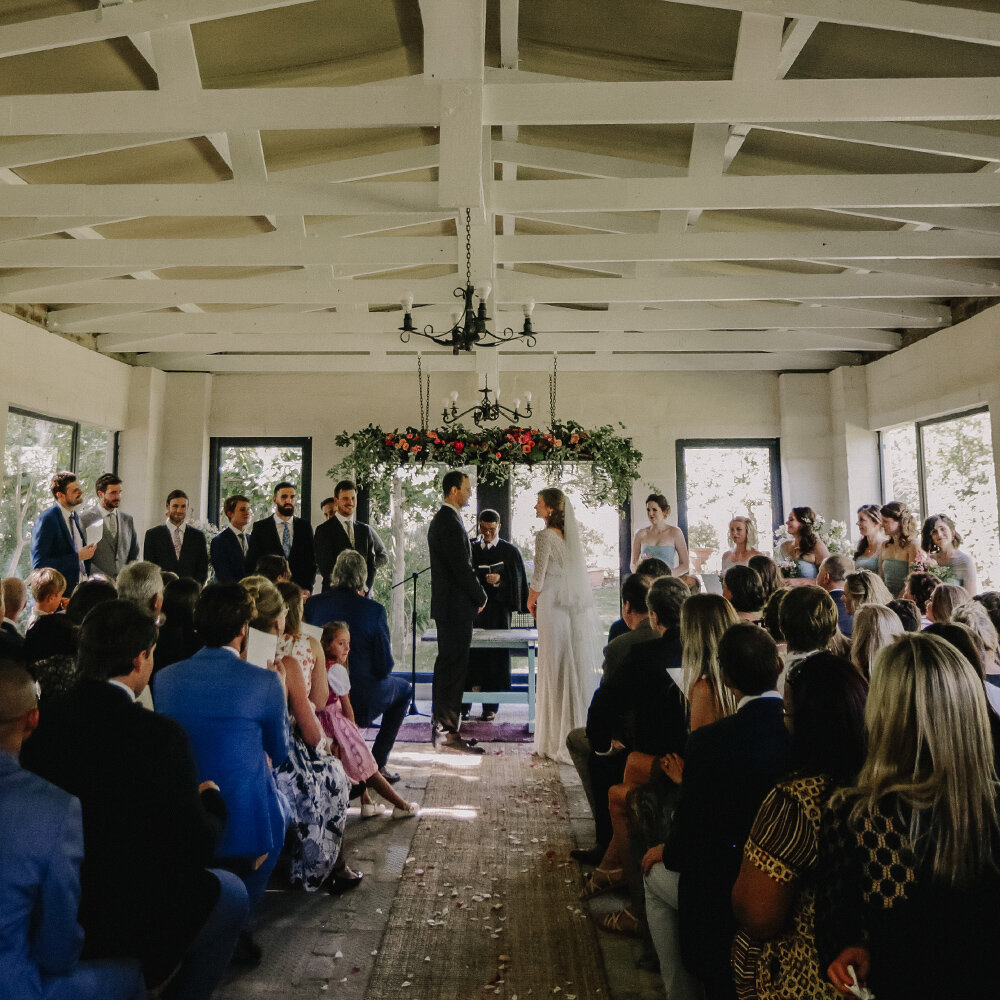 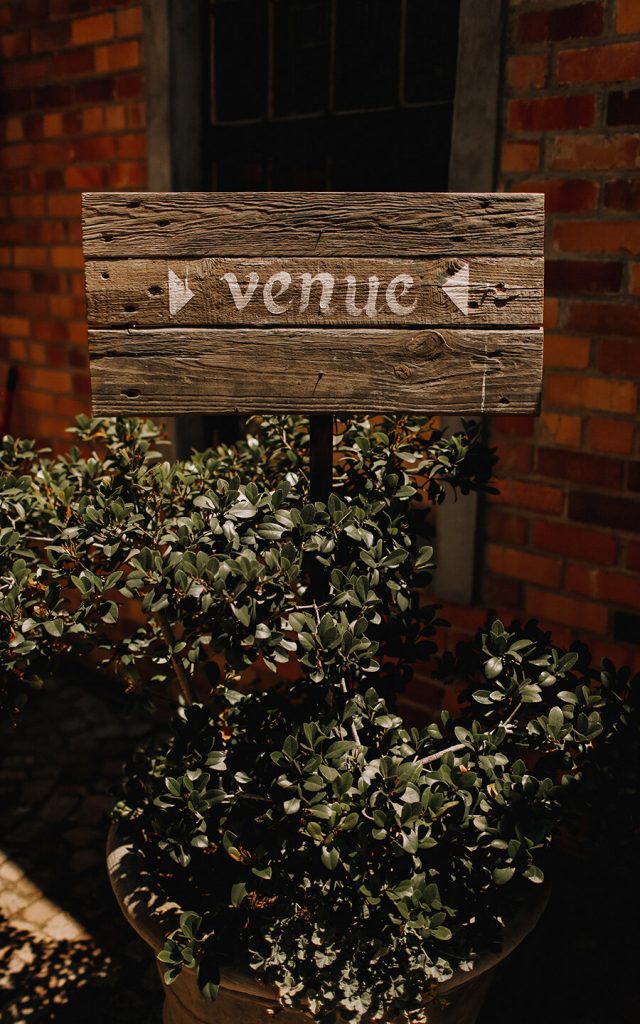 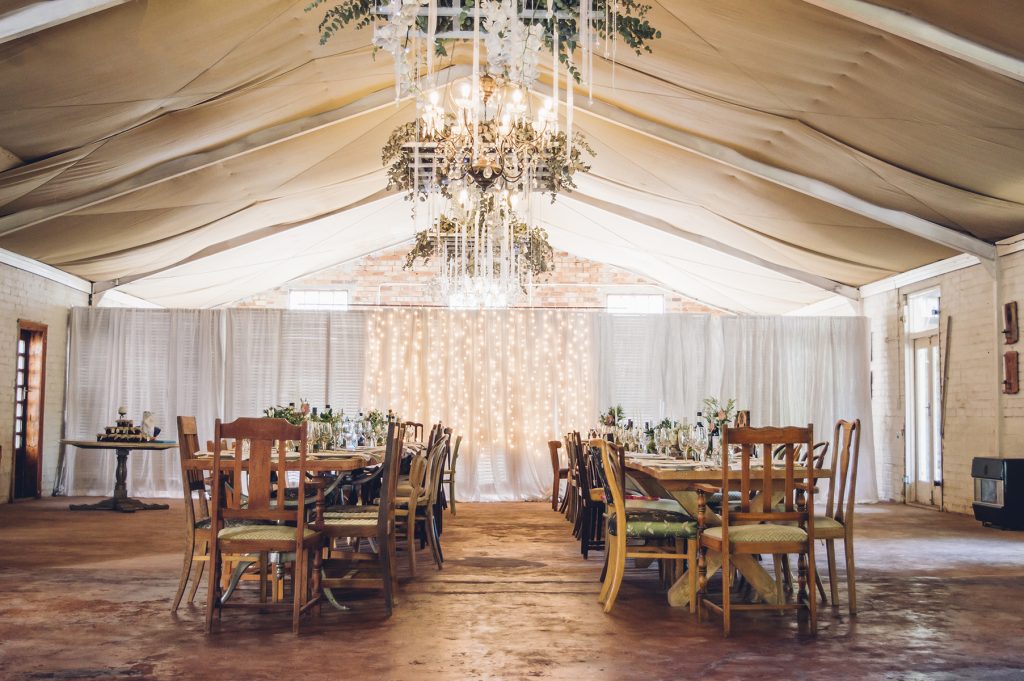 An affordable, authentic farm experience
The Damarakloof team takes care of every aspect of your wedding, providing a friendly, efficient, comprehensive service, tailored to suit each client’s requirements.

For weddings, we offer our Farm Barn and Garden Chapel as venues. Rolling fields of vines and crops, sweeping lawns and fragrant blooms make for picture perfect pre-drinks and reception areas. Combining the simplicity of our farm buildings with style.

Damarakloof offers in house catering with a wide selection of drinks. We serve our award winning Damarakloof wines from our vines planted in 1956. Should you wish to bring your own wine, a corkage fee will be charged.

The Farm Barn
Our Farm Barn can accommodate up to 160 people and is perfect for your wedding reception. The original barn gives a glimpse of a bygone era, offering couples the opportunity to select from a range of antiques from our Collectables Room.

Garden Chapel
Our Garden Pavilion is perfect for wedding ceremonies. Set amongst the Daramakloof gardens, this light-filled space overlooks the vineyards and surrounding landscape.

Stay in one of the existing farm buildings that have been transformed into guesthouse accommodation. Exuding style and charm; french doors and shutters, lofty ceilings and eclectic decor, this affordable and accessible accommodation provides an authentic farm getaway.
Staying at Damarakloof

Country House
The Country House can accommodate 6 people. This cosy guesthouse has three double rooms and two bathrooms. It also has a fireplace, fully equipped kitchen and a private garden. 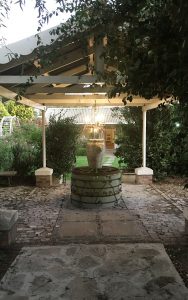 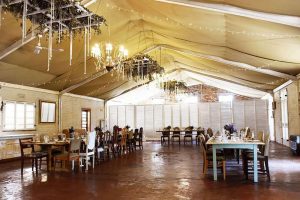 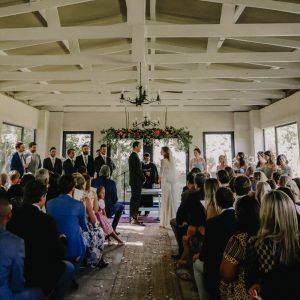 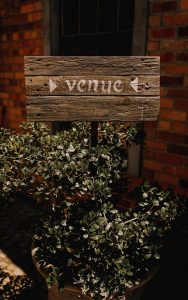 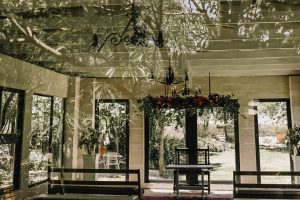 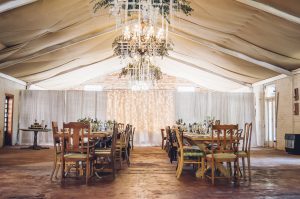 Let us help you design your special day

The heart of the Stellenbosch Winelands